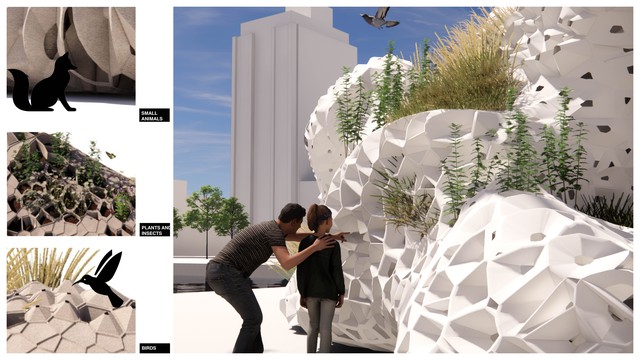 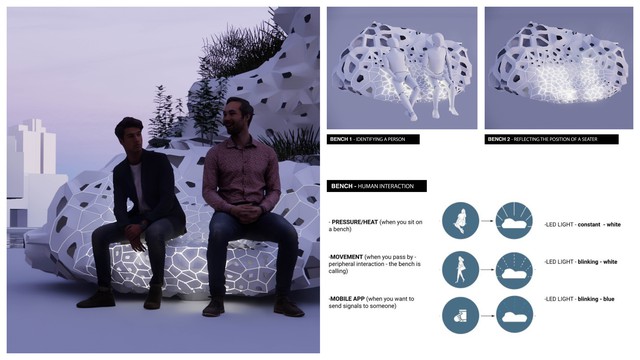 Are the cities just built for humans? Do you ever wonder about other animals when walking through the urban areas? Sometimes we forget that there are other species except us. By paving the streets and building densely we created no space for animals, plants, and insects to find shelter. But should it really be this way? Does the ecosystem not work better when there is more biodiversity? The urban furniture project of Cyber- Physical Bio Dune has been created to answer these questions. By creating the furniture in the harbors of Rotterdam, a space to accommodate humans, plants, animals and insects has been created. The dune-like furniture is a place to sit or lay for a human, a shelter for animals, and a space for plants to grow. By welcoming all these species in its interior, the object helps them to spend time close to each other, interact and learn.

Presented design acts as a response to the urban needs of its inhabitants, be it humans, animals or any natural habitats. The aspect of retaining the biodiversity in modern cities emerges to the forefront, the response takes inspiration from the natural environment and possibilities that the most innovative technology offers. It was established as a part of the 1:1 Interactive Architecture Prototypes Workshop at Delft University of Technology and included the use of Design-to-Robotics Production and Operation techniques. The design is based on a shape of a dune that later on is translated into a 3D printed structure, the use of 3D printing technology allowed to produce a form that corresponds to the functional division, propose a solution efficient both in the use of materials and the process, as well as integrate data and information within the built structure. The form of the Dune is created by analysis of the future functions it will hold. Parts of the furniture which are intended for human use were formed through the exploration of human positions. The part intended for natural habitat was created in a way that enables sheltering animals, plants and water retention. Voronoi logic is used in macro, meso and micro scale of the design ensuring its functional, structural and material optimization and the feasibility of the project. Optimal division based on the Voronoi diagram is also used in relation to proposed sensor-actuator systems to assess the area of influence of each dune and the radius of data gathering. Sensors implemented in the design are a way of interaction between people, the environment and the project itself. They gather data which is later used for environmental forecasts but also forecasts helping to understand how the future dunes should be formed. Collected information helps to respond to environmental needs on an unprecedented scale thanks to the use of artificial intelligence and expanding network of elements. The process improves itself with every iteration and more input data. Web-based communication is a way for people to learn about their surroundings and interact with one another through the application which controls light modes. The AI, based on the data collected, is used to predict the best forms for future dunes depending on their location. Also, it is used to control and respond to the behavior and needs of plants, animals and insects in the dune. It also, tracks humans around and sends signals to invite them to interact with the dune. (more on: http://uf.roboticbuilding.eu/index.php/project12:W4G3)

Technical Concept : The process of BioDune creation has been developed through parametric modelling using Rhinoceros and its built-in programming environment Grasshopper with additional plug-ins used in structural analysis. On a macro scale, the initial form of BioDune has been analysed and optimized regarding its structural integrity and performance. Also, an external load, equivalent to average human weight (80 kg), is applied in chair components. The principal stresses are a result of the structural analysis. The functional division of the urban furniture is also reflected in structural composition: higher material density is used in areas with planned seating for people, whereas increased porosity is applied in parts designated for planting or animal shelters.

Visual Concept : Integration of advanced computational techniques in the design process leads to the altered role of an architect, who becomes a curator in all phases of form generation. He does not have full control over the final outcome but works together with the computer that becomes an integral part of the design team. This approach results in a new design aesthetics which fuses organic and man-made features. Unexpectedly, the use of robotic techniques in architectural design gives more possibilities of meaningful integration between urban environment, nature and humans themselves thus should be a focal point of future studies and be widely implemented.